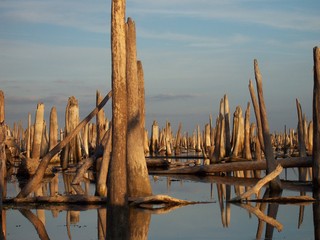 The remnants of the thick hardwood forest of cypress, hickory and sweetgum that once lined the historic Ocklawaha River before the Rodman Reservor was built over 70 years ago. The inudation of 9,000 acres of the river's floodplain killed everything growing there. Once every three years, the reservoir is drawn down to control aquatic weeds. We paddled there in Feb. 2008 and this is what we saw. 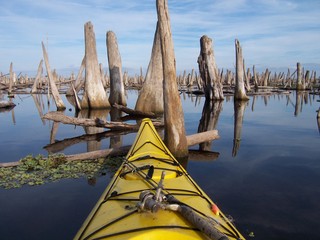 Another view of the normally submerged trunks that used to be a hardwood forest. The spinning reel rig attached to my hull was lost by a fisherman. Reservoir level is down about 8 feet during this visit. 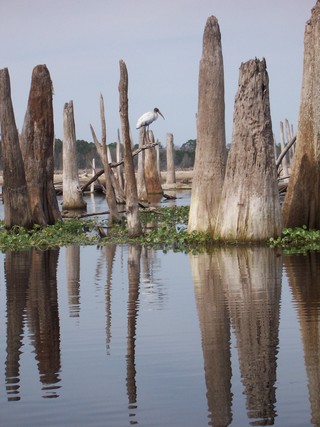 A juvenile wood stork or "iron head" in the dead forest during the Rodman draw-down. Water level is usually at the top of the tree trunks. 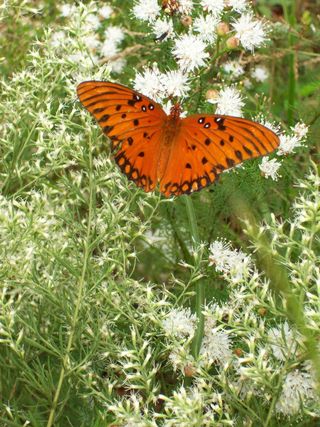 A Gulf Fritillary, one of our Florida butterflies that migrates from the north to the south in the fall and early winter here. There's lots of wildflowers, berries, nuts and critters simmering in the woods at this time, and with the glorious weather, it's a blessing to be able to be out in the midst of it all. (This little guy paused just long enough for me to get the shot.) 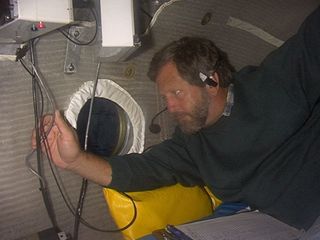 Here we are in the JSL submersible under 2,000 feet worth of Cuban sea during an expedition there by Harbor Branch Oceanographic.

EXCERPT OF ESSAY: "Fire, Water, Friendship in the Night" on the Mosquito Lagoon of Florida's East coast
"Rediscovering Rawlings, a River and Time"
Losing It All To Sprawl: How Progress Ate My Cracker Landscape
Named one of the "Best Books of the Year" by the Library Journal
Sunken Cities, Sacred Cenotes and Golden Sharks:
Travels of a Water-Bound Adventurer (University of Georgia Press. Spring 2004)
"...finding adventure and wonderment in little-seen corners of the natural world." - Natural History magazine
"Deep Cuba: The Inside Story of an American Oceanographic Expedition" (2002)
"Engaging...exciting a broad public empathy for a place and its creatures." - Kirkus
"River of Lakes: A Journey on Florida's St. Johns River." (2000)
"...reminiscent of Thoreau's 'Walden' or William Warner's 'Beautiful Swimmers'" - Florida Today. "Definitive book on the St. Johns" - Miami Herald

Equinox Documentaries, our not-for-profit film group devoted to making films about nature and "sense of place"
VIEW OUR NEW SPRINGS FILM TRAILER HERE !
Take a gander at our newly-produced nine-minute video "trailer" that visually explains our forthcoming PBS film "The Hidden Secrets of Florida Springs". (A photo of former Gov. Bob Graham being filmed for the trailer can be found in the column on the left along with more info on the content.) Click on the headline above to take you to the YouTube link where the film can be seen and heard.
WATCH THE "PORTAL INTO THE TIMELESS WISDOM OF ARCHIE CARR", OUR NEW 18-MINUTE FILM WE PRODUCED THAT CELEBRATES THE WAY IN WHICH FAMED NATURALIST ARCHIE CARR used the Ocala National Forest to teach his UF grad students the interwoven values of ecology.
This film will be screened at the upcoming Global Peace Film Festival in Winter Park on Oct. 9 and Oct. 10. Click on the link for the Festival at the top of this column for more info.
My AUTHORS PAGE on AMAZON.COM with links to my major titles they sell as well as some bio stuff
Questions? Click here to give me a holler.
FRIENDS OF THE WEKIVA IS our region's premier grassroots river conservation group. I've been on their board for over a decade and worked on many projects with them.
ALLIGATOR PRINCESS: Learn about an exciting new film that documents a solo paddle one woman made on the St. Johns River.
A multi-media project that celebrates NATURE WRITING in the Southeast.
Authors Guild
The website for Jen Chase, who with Leslie Poole retraced the "Hyacinth Drift" river journey during the filming of "In Marjorie's Wake." 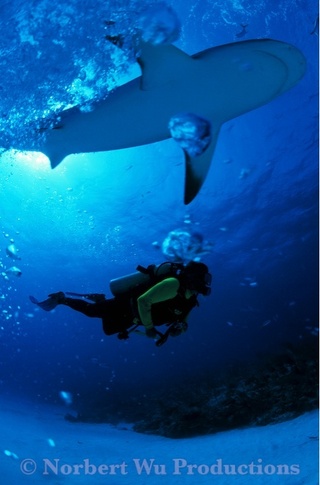 A Caribbean Reef Shark & me. (Thanks to old friend and pro Norbert Wu for the use of the image.)

NON-FICTION BOOKS:
* "The Peace of Blue: Water Journeys". A collection of 21 of my first person stories that all have to do with water. Most take place in Florida, but a few happen overseas, including Cuba, the Amazon, and Los Roques. (UPF. Late 2014. Cloth)
* "Salvaging the Real Florida: Lost & Found in the State of Dreams". 92,000 word anthology of my narrative-style nature essays that take place throughout Florida. UPF. early 2011. (cloth & paper)
• "Deep Cuba: The Inside Story of an American Oceanographic Expedition (University of Georgia Press. 2002). My account of exploring the remote southern coast of Cuba during the first American oceanographic expedition to that island-nation. University of Georgia Press. (cloth & paper)
• "Sunken Cities, Sacred Cenotes and Golden Sharks: Travels of a Water-Bound Adventurer" A collection of adventure-travel essays, articles and narrative essays. (cloth)
• "Losing it All to Sprawl: How Progress Ate my Cracker Landscape" (University Press of Florida. Spring 2006). A chronicle of my experiences living in an Old Florida homestead that became threatened by sprawl. (cloth and paper)
• "River of Lakes: A Journey on Florida’s St. Johns River" (University of Georgia Press 2000). [Miami Herald: The ‘definitive book on the St. Johns] (cloth and paper)
* "Rediscovering Rawlings, a River and Time: Filming In Marjorie's Wake on Florida's St. Johns River" (a companion to the national PBS documentary "In Marjorie's Wake")

OTHER DOCUMENTARIES
"Off the Map", a 13-part series focusing on eco-heritage of a site while kayaking rivers and waterways of Florida broadcast on the Sunshine Network.

* "Salvaging the Real Florida" is awarded the national Outdoor Book Award in Literature & Natural History category. 2011
* "Losing it all to Sprawl" named one of "Best Books of 2006" by the national Library Journal
* "Losing it all to Sprawl" given the 1000 Friends of Florida's Al Burt Award for Excellence in Journalism in 2006.
* "Losing it all to Sprawl" named to the "Just Read, Florida!" recommended curriculum list by the Florida Commissioner of Education
* "Losing it all to Sprawl" First Annual Florida Book Awards 2007. (Bronze)
* Carol & Bob Grimes Environmental Award. 2006
* Certificate of Award of the Order of the South (The Southern Academy of Letters, Arts and Sciences, Inc.) 2006.
* Award of Excellence: Outstanding Journalist 2006. The Florida Planning & Zoning Association.
* Environmental Writer of the Year respectively from Florida Audubon & Florida Wildlife Federation.
* Michael J. Shaara Outstanding Writer (2000) for ‘River of Lakes.’
* Excellence in Column Writing (Florida Magazine Association)
* 2004 'Champion of Sustainability (Nature) named by the Healthy Community Iniatives of Orlando (2004).
* "River of Lakes" selected as the choice for Central Florida Reads program for the region sponsored by the Orlando Sentinel and the Orlando Public Library for 2005-6.
"Losing it all To Sprawl"; "Sunken Cities"; and "River of Lakes" named to national ASLE recommended curriculum reading list for the study of literature and the environment.

Lectures & Other Presentations (a partial listing):

ACADEMIC CONTRACT WORK:
Writer-in-Residence for 2004-2005 at the University of South Florida (St. Petersburg, Fla.) in its Florida Studies program.